There it is. Our short film “Das ist kein Hexenwerk”. Word for word translated it means: “that is no witchcraft”, but actually it’s a german saying with the same meaning as “It’s not rocket science”. This is supposed to be funny (not really after I had to explain it…) because in fact this short is about a witch… never mind, let’s move on.

Willa the witch wants to pass her final exam: she has to brew an invisibility potion. The examiner, a dead bored frog doesn’t like the clumsy, spontaneous witch and really hopes that she fails to pass.

It all started with Willa. She’s a young, green witch and she was the very first thing we designed.

We made a lot of tests to make sure that Willas hair and cloth will work for all of our shots,

Of course we needed the examiner – a frog – as well. We created some concepts first and then built him in 3D.

At the same time we started to design willas chamber. 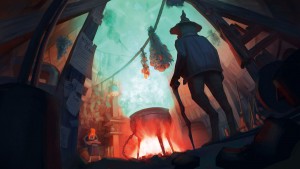 We made some fancy fluids, composited everything together and finally it looked like this:

If some of you want to find out more, you can look through our documentation (sadly it’s written in german but there are a lot of pictures as well :D) You may need to download it, because google drive can’t display it correctly…
Das ist kein Hexenwerk documentation

Thanks to Timo Schnitt & Markus Fischmann (our real examiners, because this was our bachelor thesis)

Buy Me a Coffee